Some Citizen Outreach Coalition (COC) volunteers were on Saturday April 11 2015 out in force at the Liverpool One city Centre area to distribute some of the 8000 flyers printed as part of an anti crime reduction project. 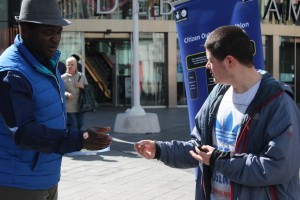 With a large COC explanatory backdrop poster, the volunteers handed out the flyers to residents most of whom applauded the initiative to fight crime across the city designated the European Capital of Culture” in 2008. According to COC Coordinator Vitalis Tanteh, it is important to also reduce the crime rate in the city and encourage visitors because it is known for producing The Beatles, one of the best known bands on earth. Approximately 1000 tourists, most of them foreign nationals visit the city weekly to get first hand experience of the band that has been immortalized in a museum and shop situated at The Albert Dock.

“Great initiative…I will definitely show this to my two teenage sons and encourage them to attend one of the workshops” one 50 year old resident said after receiving two of the flyers. “I wish you the best with your project” she added.

Chi Mbangsi, one of the volunteers said he was initially apprehensive to get involved with the distribution but later enjoyed the experience. (See his confession below) Another volunteer who did not want to be named said it was also the first time she was distributing a flyer in a public place but liked it and will take up the challenge the next time she has an opportunity. “A lot of young people do not understand the long term implications of a criminal record on their life so its good they get to learn that through workshops and flyers” she said.

As part of a lottery funded project to reduce crime among migrants and young people, COC is organizing a series of workshops on and about the Criminal Justice System across Liverpool schools, hostels and at the Liverpool St George’s City hall. A simple criminal record like a caution or shop lifting could have serious implications when someone is buying an insurance policy, applying for a job or even travelling abroad. Some countries including the United States do not give visas to convicted felons. 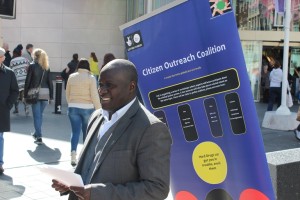 The flyer distribution was a roaring success

Francis Ngwa, COC Chairman said the workshops will also benefit people across the UK but the long term goals of the project is to help reduce crime rates across the world which is why COC had a facebook page and other social media pages to help take the message beyond the shores of Liverpool.

“A comfort zone busting experience.After a quick brief about the purpose of the flyers and a rehearsal of some of the foreseen queries that interested members of the public could have regarding the information on them,  it was off to the precinct to hand out flyers. I was nervous and apprehensive as it was to be a first for me and I appeared to be the least experienced member of my team of three. We set up a 1.5 metre stand across from the Pound Bakery shop on the St. John’s precinct, Liverpool and proceeded to hand out the flyers. 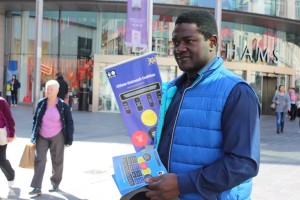 I practised my friendly smile and enthusiastic voice for the next hour as I experienced every reaction from people readily reaching out for the flyers and asking questions regarding the conferences on offer to the not interested pal response.Have never imagined myself in such a customer or public facing role and just standing there engaging with the public was an eye opening, enriching and comfort zone busting experience…Thank you Citizen Outreach Coalition”.